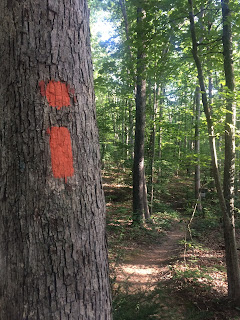 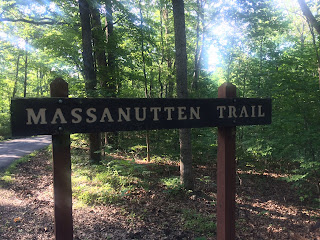 Five years ago the first mountain bike single pull of the Ring was completed by Michael Carpenter and Kyle Lawrence.   Check out the video. Carp and Kyles Ring

Notice the hard tail Kyle is riding and the absence of dropper posts. Those two guys are the some of the best riders and endurance riders that I know.  They also are just tough and stubborn dudes. They had ridden in that area many times and definitely had a sense of what they were getting into.

Fast forward to 2015 When stranger to the scene Barry Croker did a solo completion on his racy Scalpel and carbon soled shoes.  He missed Waonoze, so asterisk to some, but I'm counting it regardless. You can  read about his ride here. Barry's ring  Barry went on to make other attempts to be thwarted by thunderstorms and maybe his riding partners.  Funny thing, he still plans on doing it again and maybe again!

It is something that I have wanted to do, and found myself telling some folks that it was a goal of mine.  I have done many rides up on orange loop including the Two Towers ride that is usually a stage of the tour de burg.  I've also done Short Mountain and Jawbone pretty often.  Honestly, I usually do those two trails by themselves, what we call low miles high miles.  The mileage is less that 4, but we end up sessioning and practicing moves because they are so difficult.

The riding on the Ring is the hardest, most difficult riding there is on the East Coast.  I feel pretty confident in sayin that.

As a step towards the goal, Carey Lowery and myself rode it as a two day in  November of 2015.  It was a lot of walking, but when you are fresher you can attempt to ride quite a bit.  After that two day, I felt the one day was realistic.

I found myself stating as my goal that I want to complete the Ring.  But somehow timing and motivation were always a little off.  I thought that I could do it in the Spring of 2017 actually writing down a few days on my calendar  but schedules, weather, injuries and strength were the issues.

In May, two really awesome riders, Carlos Grande and Sam Skidmore, slayed it in 15 hours.  That time is mind blowing.  But knowing that Carlos is one of the fittest guys I know with long legs and then Sam is probably the most natural and relaxed rider that I have ever seen, it makes total sense.

Now there are others who have tried and failed particularly of note are Jeremiah Bishop and Sam Koerber.

In June, Lindsey Carpenter, attempted the Ring as the first women to do so.  Lindsey is an exceptional rider and person with the strength and stubbornness to do it.  Coincidentally, she is the daughter of Carp and the girlfriend of Sam.  So the connection was strong.  She was doing well hitting 13 hours when her feet brought her down.  Lindsey got severe blisters and has had some painful issues with her feet and bunion surgery.  It was a harsh reminder that something like this isn't just about your riding ability, so many little things go into the equation. The boa on my shoes blew out a couple days before, so having to run new shoes was a major worry with this much required walking.

Something about the summer solstice truly inspired me.  Coming off putting on the very successful Canaan MTB Festival, I was energized.  I made the decision to do the Ring only two days before.  I didn't need too much gear more than a normal long ride except lights.

Planning is my weak point, but experience and knowing myself is my strong point. I decided to go it solo and self suffort.

I went the evening before and set my stashes.  I put food and water at Jawbone, Duncan Hollow and Veach.  I set up my stashes to do a reverse Ring.  My thinking with the reverse (counter clockwise) was that it would be a fresher perspective.  I had always done rides in the same direction that the normal route goes, so mixing it up would keep is exciting.  Verdict is still out on what direction is better, but I'm leaning towards the clockwise version as of now. 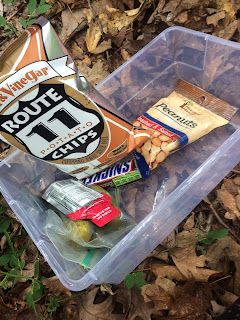 I stayed at Preston's house and then started the Ring at 1:30 on June 22.  I hadn't done a night ride in years and it was awesome.  I enjoyed Signal and Woodstock and Waonaze.  Short wasn't too bad, but I made a mistake with not leaving water at the start of it.  I was thinking that I wouldn't drink a lot in the middle of the night.  So I was really thirsty when I got to my stash at bottom of Jawbone.  Jawbone was the worst with so many briars, walking and fatigue.  Bears had pulled down so many service berry trees to get to the berries.  I would feel sickish and frustrated quite a bit on this part. Once again I needed more water. Miles and miles of walking done at this point. But I will say my Pearl Izumi Trans-Alp shoes were really awesome and that is no easy task over this terrain. 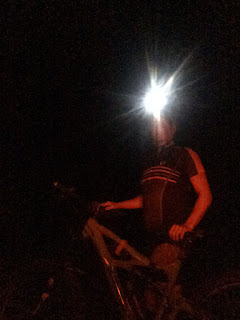 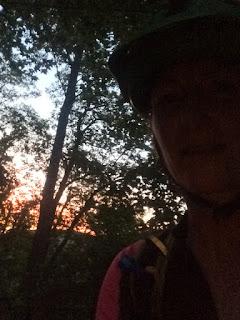 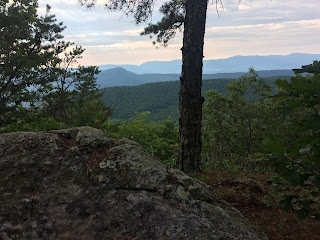 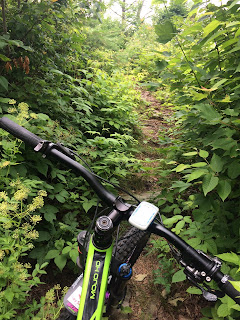 Sure, going down Waterfall and Duncan was great, but climbing up from Waterfall was particularly brutal.  I drank out of the creek twice there and no beaver fever, so that's good.  I got to my stash at Duncan and  and was feeling  confident and revitalized because of the familiarity  of the next sections. I had also been texting just a little with Barry, Preston and Lindsey.  My phone loses battery pretty quick, so I had to watch it in case of a real emergency.

On a normal day, riding up Kennedy's is a doable challenge, today walk walky. And then walk some more for the half of the ride.  Certain sections, I was so pumped to ride some technical trail.  Other sections I knew how pathetic it was that I couldn't.

I knew descending into Creasy Shelter and then having to climb back up to the ridge would be brutal, so I left a can of soup, cold brewed coffee, red bull and other treats at Veach.  I cut my hand on the soup and was getting eaten alive by mosquitos.  Climbing Veach is normally hard, but doable.  Today was walk walky.  Any pressure on the saddle hurt.  It wasn't too bad, but honestly after I got to the overlook, the real test began.

The ticks and deer flies swarmed me on  the east ridge.  The briars that had destroyed my skin on the west ridge were now being bitten by ticks, hit by my pedals incessantly and tormented by deer flies.  I really wasn't expecting to be picking ticks off me while I tried to negotiate this gnarly terrain.  It isn't that easy to get a tick off of you with cycling gloves on.  Oh, and at the slow pace that I was going, the gnats buzzed constantly in my ears and eyes.  Certain places poison ivy engulfed the trail.  Still waiting to see if I got it. 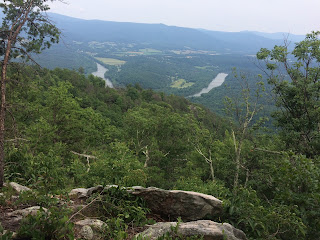 From Habron to Shawl is  total brutality at this point.  So many hike a bikes and rough terrain.  I did ride a couple of sections that I just thought, fuck ya.  An extreme low point came when the orange trail dips on the east side of the ridge.  Normally, when we are riding up there we don't do that, we just stay on the ridge.  But in order to follow blaze...I said FUCK there more times than any other place.

Doing the math, which I'm never good as I get tired, I knew that I could make it in a day.  I wasn't sure about my lights though.  I had only one light and used it for almost 5 hours in the morning.  I got to Shawl just when I needed to put it back on.  My hands weren't really working anymore.  I had to use my teeth to put it on.  I finally got it on and there was some juice.  Thank god I could descend with a light.  I rode some tough stuff on Shawl, I guess because of adrenaline.  I caught some air and though to myself , yeeha!  If I ever doubted that I am a mountain biker through and through that moment cemented it for me.  I still want to find flow and have fun when I'm on my last leg.

The car was so close, but had to do the proper blaze and finish the 3/4 mile on the only built trail on the Ring into the parking lot.  My car was still there even though I had thoughts that what if someone stole my car and I had to ride to help?

I hadn't really planned what I was going to do after, but Preston had sent a text to say I could stay at his house.  I needed two hands to get my car started because truly my hands took the worst of the wear.  I still was crawling with ticks and imagining more. I was so chaffed. 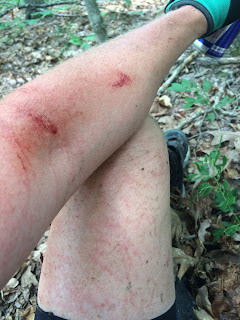 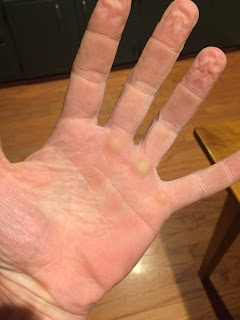 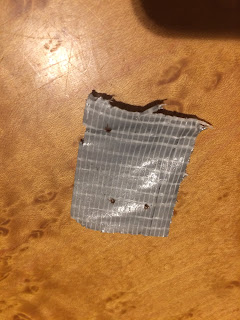 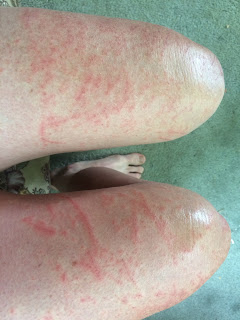 I got back to my car at 10pm after 20.5 hours of being out.  No record time, but first person to do the reverse Ring and first woman, 6th person to complete the Massanutten Orange Loop by mountain bike.

This whole thing started with a running race that has kept detailed records of the event.  Check it out. Happy Trail Runners

A hard thing about this was going right into a 3 day instructing and guiding weekend for 18 women at Elk River Touring Center.  I was exhausted and beat up, but realizing the power of the mind is greater than any physical strength or limitation.  Women constantly list finding confidence as the number one reason to take a clinic from me.  I tell them that you find confidence by doing things that are hard and outside your comfort zone and surviving them and learning from experience.  Completing the Ring, definitely gave me the confidence to know that I'm tough and do can hard things.  And it reminds me to continue to surround myself with people who dream and push their limits and basically "do shit". 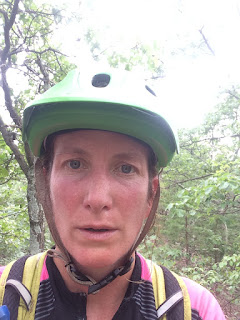 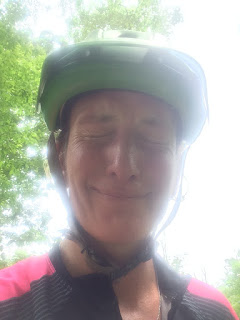 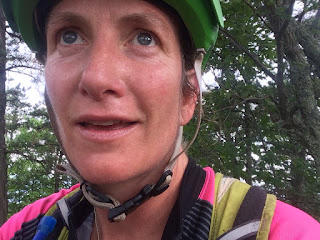